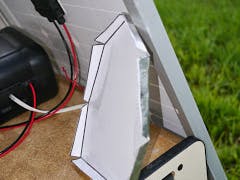 A while ago I was planning to power my external work area from solar power. So I went ahead and ordered a couple of 100W solar panels from China. They cost $100 including the charge controller with another $100 for FedEx shipping. They have served me well so far, should have ordered some more. They have been keeping a 130Ah SLA battery fully topped up for a couple of years now. I never got around to acquiring an inverter, so my soldering stations are not yet solar powered.

After accumulating electronics parts, devboards and recycling TV parts for a year I had enough bit floating around that I had to construct a shed to put them in. At the very far end of the backyard, away from the house. It is a major hassle deploying electricity to the shed. So I decided to take the panels, which were languishing against a pole in the back verandah, and deploy them on the shed roof.

I installed the PID charge controller and massive battery on the inside together with some LED bar lights, suitably coated in clear silcone for weather proofing. Ultimately there are plans to build an MPPT controller and add some monitoring for solar energy generation as well as add some bitcoin miners for network support. The Carinya brackets I used to install the panels cost as much as single panel, next time better order brackets as well.

The LED's are controlled by a small $2 RF remote with a dimming and flashing function. A bit of an overkill but it makes for great raves in the shed. Being basically the large galvanized steel box the shed has very good RF shielding and an external weather proof antenna will be required for any sensor install and wifi connectivity. So I have hooked up a TPlink external antenna and placed a Udoo Neo with mods for an external antenna there, more Udoo + shed related posts to follow.

Andrea Rovai
Thanks to Tisham Dhar.