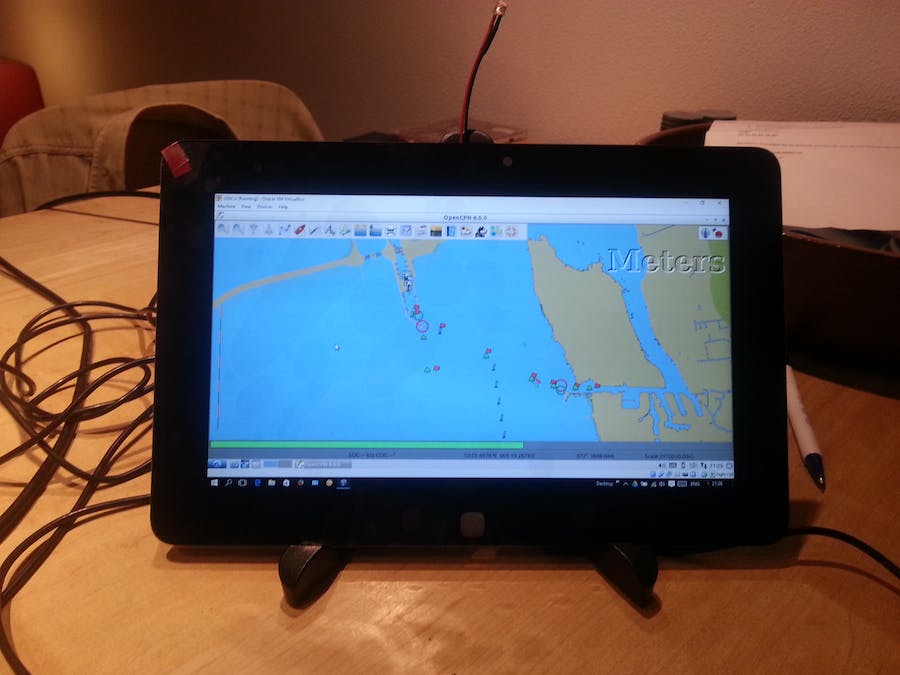 Being a passionated coastal sailor with a small Etap 22i, I'm quite often sailing solo on Ijsselmeer and Waddensea here in The Netherlands. Last spring I finally decided to gonna use a Raymarine ST1000+ autopilot, after doubting for so many years. At the same time my old Garmin GPSmap 76Cx (which also drives the autopilots route) and the very old Autohelm Tridata ST50+ instrument, were not that solidly working anymore. Furthermore I was using some digital navigation on a large screen smarthphone and tablet, which only works out a little bit under ideal circumstances. That means no full sun, no rain and no rough sea. So it doesn't work at all in practise on a small boat :-(

When looking on the maritime marketplace for a ST50+ replacement, I realised that this industry still builds on closed standards and only makes proprietary boating electronics and transducers. I don't like that. I'm the type embracing the makers idea from Chris Anderson (formely Wired).

So I thought it might become time for something more open, flexible and more powerful. I decided to start exploring the idea I've got for a DIY integrated Maritime Instrument & Display Controller (MIDC), where a low budget AIS receiver also should fit in. This MIDC should then become the hardware & OS platform for existing marine applications or software stacks (under development). The conceptual idea of MIDC was there!

In July 2015 after a thorough market study, I finalised the global design of a powerful and flexible Maritime Instrument & Display Controller, based on a brand new Single Board Computer. This SBC is the UDOO Neo. This design obviously comes along with some tough engineering challenges, specifically for the harsh maritime environment. In my analysis, the lack of a waterproof display and a open maritime computer system is the main reason why most of the good marine open software initiatives, still are being deployed in limited use cases in the cockpit. Will it feasable to make and DIY what has been caught in my mind?

The design goals for this MIDC were quite extensive:

Regarding the application software (stacks), there must be support minimally for:

Plus the option to wireslessly feed on board mobile devices with navigational data, including chart plotting + current position). Not neccesarilly simultaneously, but selectively based on what's suits the needs of the user best. So a modular approach and moving target as integration and coexistence of the closed NMEA2000 world and the open world of SignalK may heading for the good direction.

In addition to all this, I'm closely observing what's going on with the Open Sailing Processor and Open Plotter. Support for these open source maritime projects, partly or integral, would really make it a powerful and flexible MIDC which can suit most of the regular and essential needs for boating electronics and digital navigation. And finally there might be iKommunicate, the NMEA to SignalK Gateway, in the near future. Coexistence when released and a gradual evolution with the MIDC will be a breeze.

The heart of this MIDC will be UDOO Neo (Plus version) which is due to be released on (pre) order in November this year. UDOO Neo = Raspberry Pi + Arduino + Wifi + Bluetooth 4.0 + Embedded sensors. This currently quite unique SBC can run both Android and Linux and can connect a display through both LVDS and HDMI.

I'm patiently waiting for this device to become available. The crowdfunding campaign was a big success. Personally I encountered UDOO Neo just after the campaign was closed so I'm not part of the backers :-(

After a long market search, I've found a possibly good source for sunlight readable touch screens which will work both on Ubuntu and Android. The first samples of these screens are expected to be delivered from the beginning of October this year. I'll think this source is a good one, however you never know in reality.

I would be happy with a 10' display that has the following characteristics:

I expect to have this display tested on the UDOO Neo in late Autumn and will report on it here.

The display shown currently is a LG LP101WH4-SLA6.

It's my intention to share design information through the SignalK Google Group and here when the first prototype has been build and proofed to be working (more or less) in practise. I expect this will be in late autumn this year. Now parts of design sources are shared here under the license CC BY-NC-SA.

From the outside it might look quite simple to build this MIDC thing with existing hardware components. Working on it for a couple of months right now, I know better: it isn't, for all kind of reasons :-(

A lot of my research results for this adventure has been documented (currently in dutch). To give just an example of the kind of documentation: how to get Ubuntu 14.04 working with a LVDS touch screen, based on a eGalax touch USB interface board with multi touch?

This project Web-site publishes the most relevant information from this documented adventure.

The main challenges currently left are:

On CruisersForum there is thread with some discussion about building the MIDC. Besides that in the SignalK Google Group, there is a hardware thread were I inregularly post some small update messages.

There are some future developments I'm thinking of:

dAISy receiver has arrived from US. This tiny little thing has been tested on my boat with OpenCPN and an external VHF/AIS antenna. The external antenna in my opinion is a must have, because I don't think the low budget rtl-dsr dongles without that will have sufficient signal reception to rely on with AIS.

The first test showed a reach of about 15 miles on open water. It took some considerable time before all AIS targets had been identified and showed in OpenCPN. Conversation with Adrian made clear that there was room for improvement in the software for signal handling. A new firmware with better decoding algorithm is on the way to release.

The 3 and 6 mm plywood  has arrived 10 days after submitting the job to a professional laser cutting service provider. The details of the cutting are quite good, however some curves are not that smooth. The dimensions of all parts are perfect. So glueing it all together must result in a good mechanical fit.

The service provider analysed the glitches and they admitted that their optimization software hasn't done the job well. They promised me better quality for the next run.

What's left for the display enclosure?

The final result so far of the enclosure is good. I've made two small mistakes during the design and assembling process. The hole for the light/dimming sensor has been located wrong. I've read the technical drawing of the LG display not correct. That's a design error. Second one is the glueing of the side panel with the hole for the mini speaker. During assembly I accidentially swapped left and right. Both mistakes could be tolerated or corrected. So no new parts are neccesary to complete the enclosure.

The next step is waiting for the Sure Electronics amplifier to arrive from China. When that PCB has arrived, the electonics could assembled. The 3 cables for HDMI, USB and a 6 wire signal cable for the 2 switches and power source could be connected. The speakers could be mounted and finally the display itself will be attached to the enclosure with a Sikaflex polymer sealant.

This all will be done just before the UDOO Neo will become available.

Waiting is over. The first 100 UDOO Neos have been produced and are almost ready for shipping.

And the postman surprised me this week with delivering the last MIDC display parts from China.

The long searched for IP65 classified small switches have been found. There aren't available in The Netherlands as far as I could find out. So, importing again? These switches could be applied in the next gen display enclosure with the long awaited sunlight readable screen.

The first iteration of the new 3D desgin which could be 2,5D CNC machined from plastic, has been made. This design is made based on the current display to obtain market feedback about product makeability and price level for small volume prototyping. When the price level is too high, getting a own CNC router table might be an option.

The audio amplifier module has been connected to the tiny speakers and the HDMI auidio engine. HDMI audio engine isn't working properly. Lot's of noise and sound distortions. Amp. and speakers are working allright. So what's going wrong?

Just a simple rendered image of the possible resin casting display enclosure. This enclosure must meet IP65 and beiging capable to evolve in IP67. This design currently has been optimized for 2,5D CNC routing/milling. Functional prototypes will deliver the baseline to optimize further on for moulding/resin casting. That might become next month.

The first study result for a possible commercial release of the MIDC, shows that the price level of this enclosure as communicated earlier on CruisersForum could be realised as expected. That price level can be reached with a quite low volume on initial production. To be precise 100 pieces at a minimum. So maybe a Kickstarter campaign must become part of the possible commercial open source route?

For now I can gradually move on with this enclosure concept, to optimize and finalize it. And then let 3D Print a first one when the whole 3D model is there. So far, so good. 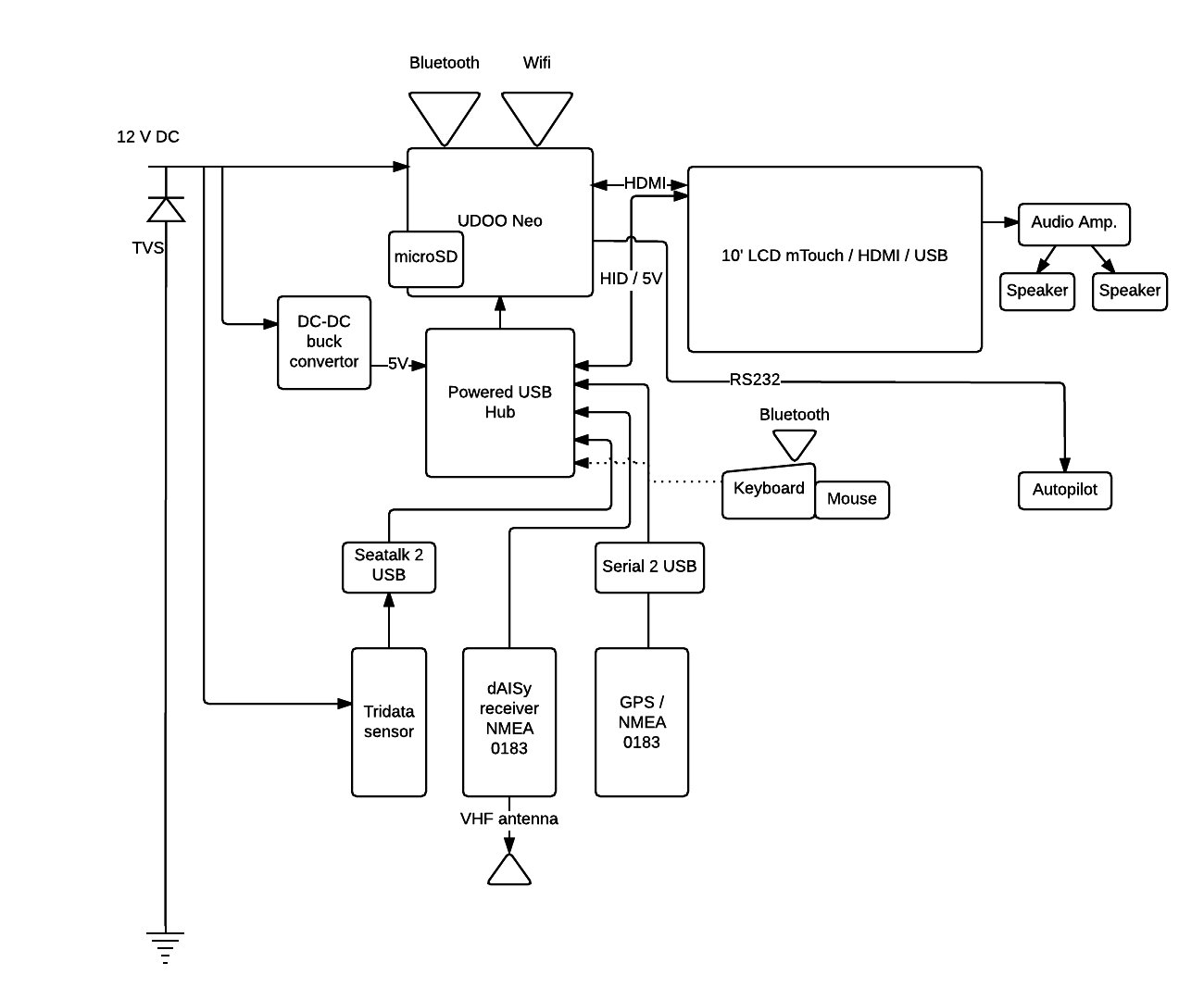 2 projects • 41 followers
Being an I(o)T pro, 3D Printing consultant, 3D Designer and Maker. In my spare time I like sailing with a small boat and enjoying cycling
ContactContact