Step by step guide to build your own awesome bartop arcade cabinet with UDOO BOLT.

Step by step guide to build your own awesome bartop arcade cabinet with UDOO BOLT. 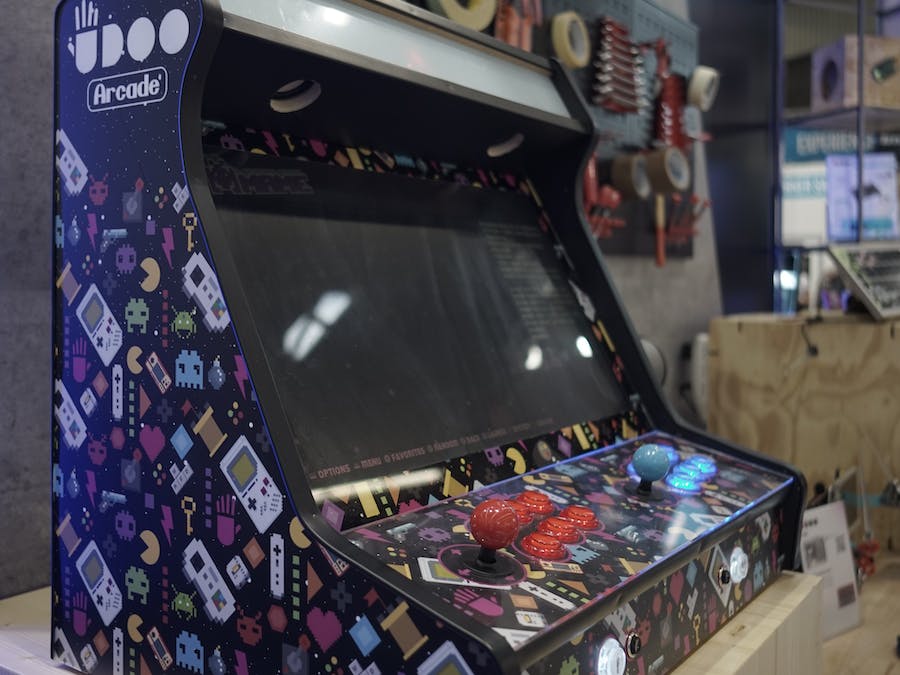 In this tutorial we’re going to see how to make an awesome bartop arcade cabinet using UDOO BOLT. The guide will be separated in 4 different parts:

To assemble the case of a BarTop Arcade Cabinet, we followed this guide from thegeekpub.com that helped us during the building phase. If you have any doubt during the assembling, please consult it for more detailed infos.

The first thing to do, is to create an 80’s retrò looking case of an BarTop Arcade Cabinet.

In the cut plane design, we placed the holes for the buttons and the controllers for the two players, and for the select and player’s start buttons.

The cut plane comes also with some optional holes for the accessories we envisioned, such as: the speakers holes in the plane on the top of the monitor; the external USB connector in one of the side that could be useful to connect wireless keyboard or USB drive; the circular fan hole and the hole for a power switch in the back side.

As an optional step, we routed a groove in the side parts of the case, to allow the affixing of a T-Mold for the perfect retro look!

Once you have all the pieces ready you need to assemble them.

From the remaining part of the wood, we obtained some strips of different sizes that can help to assemble the cabinet.

Once we have assembled the cabinet it will look like this:

We’ve painted all the part of the Cabinet, first with a primer and then with the black paint to cover all the parts not covered by the vinyl sticker we will apply later.

After the painting phase we pasted the vinyl stickers and the T-Mold with a hammer.

You can create your cabinet with any UDOO BOLT versions. All the versions are powerful enough to run all the retrogaming emulators for a great arcade experience.

Now that the cabinet case is ready, it is time to install all the major electronic components.

We fixed the monitor to its plane.

We installed the joysticks and buttons for the two players and system, and then we plugged all of these controls into the controller boards. This is really simple because the controller boards connect to the UDOO BOLT board by USB and they are directly seen as an input game device.

At this point we set up into the case the multi power plug and the UDOO BOLT board.

We’ve connected the controllers via USB and monitor through a DP-to-VGA adapter, and we also installed all the optional accessories:

Regarding the software, we decided to install Retropie on top of Ubuntu 16.04, to have a really good retro-gaming experience possible.

RetroPie can be thought of as a framework which provides facilities for emulator launch and control, along with configuration of common features such as screen resolutions and controller setup.

One of the software wrapped by RetroPie is EmulationStation, a graphical front-end allowing selection of video game system emulators and games.

We followed the official RetroPie guide to install and configure it.

First of all you need to setup your UDOO BOLT and install Ubuntu on it as described in the Getting Started with UDOO BOLT page.

Regarding the software, we decided to install Retropie on top of Ubuntu 16.04, to have a really good retro-gaming experience possible.

RetroPie can be thought of as a framework which provides facilities for emulator launch and control, along with configuration of common features such as screen resolutions and controller setup.

One of the software wrapped by RetroPie is EmulationStation, a graphical front-end allowing selection of video game system emulators and games.

We followed the official RetroPie guide to install and configure it.

All the accessories used works out-of-the-box with UDOO BOLT without install any drivers. For example the player’s controllers and buttons connected through USB are seen as gamepad (DragonRise Inc. Gamepad) from Linux and directly configurable in easy way by the RetroPie settings.

One of the cool features of UDOO BOLT is that it embeds an Arduino Leonardo microcontroller that can be used to physically control the real environment.

Since the size of the marquee we used two matrices connected together to cover the space with a 8x47 matrix. The matrices has a simple connector on the back to make they work in cascade.

Once the matrix is connected we can take care of the software.

You need to install the Arduino IDE to program the Arduino Leonardo side of the UDOO BOLT.

You can check the UDOO BOLT docs to setup the system and install the Arduino Leonardo board manager support.

You also need to install some libraries to control the WS2812B LED Matrix. The libraries needed are:

This is the sketch we used to create some cool 8-bit retro-gaming animation.

Once uploaded the sketch the animation will start on the marquee matrix.

To create a more defined pixel effect we 3D-printed a grid to surround each pixel and covered all the matrix with an opaque plexiglass.

Here you can find some useful guides to better understand how to use the RGB LED matrix with Arduino: